Will decided he would make a decorated cake for my birthday. He has baked cakes for me before but never stepped into the realm of cake decorating. This was a first. This is truly an amateur cake!

I had recently picked up crocheting again and have also started to take in interest in knitting. In fact, with this new hobby, a corner of out living room has been overtaken by balls of yarn. He decided to make my cake in the shape of a skein of yarn. 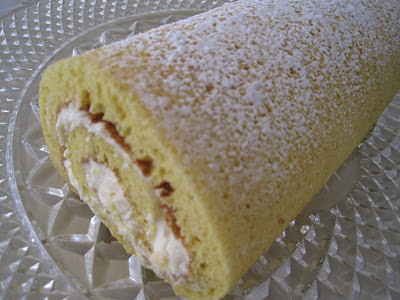 He bought a jelly roll at the grocery store bakery and a couple cans of white icing. To one can of icing, he added some blue coloring gel and mixed it in with the electric mixer. 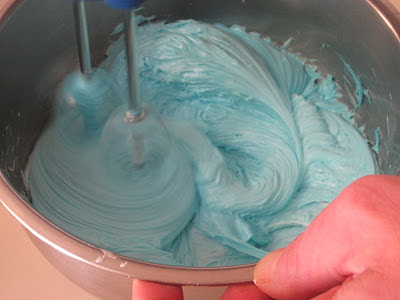 Then he trimmed the edges of the jelly roll to round them out a bit. 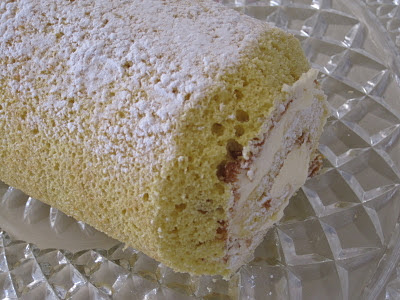 With a little bit of instruction, he filled a decorating bag with icing, attached a round tip, and went to town on the cake. He filled the 2 sides with the blue "yarn" icing and left the middle blank. 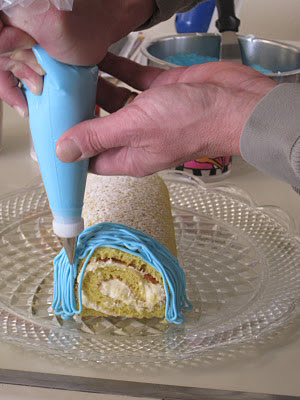 He used some of the white icing in the 2nd can to fill in the middle as the yarn "label". He left it to sit and dry some so he could smooth out the seams. 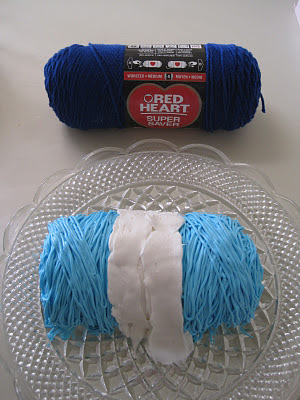 Once the white icing was "cleaned up" a bit, he added some additional blue "yarn" near the edges of the white. and then did his writing on the "label". He placed chopsticks on the plate and created some yarn coming of the skein to wrap around the chopstick "knitting needles". 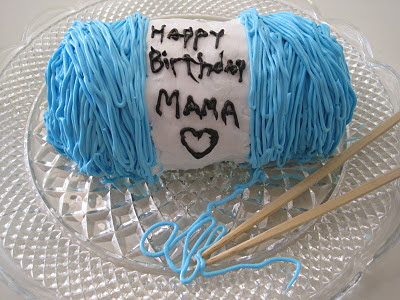 I think he did a great job! He might even decide to do more cake decorating in the future!
2 comments:

Kirby and His Star Car Cake

I was recently going through some family photos and came across two cakes from 2009 that I had not previously posted to the blog. The first was the Rockin Rubber Duck cake I made for my best friend's fiance. The second, later that same year, was a cake for my husband, Kirby and his Star Car.

The reason my husband got a Kirby cake is because my children love to play Kirby on their Game Cube with him. It's one of the things they do for "Quality Time" (don't worry, they have other quality time activities that don't involve video games). When it came time to make a birthday cake, the children decided their daddy needed a Kirby cake. So he got one. Kirby, in all his pink glory, on his star car... 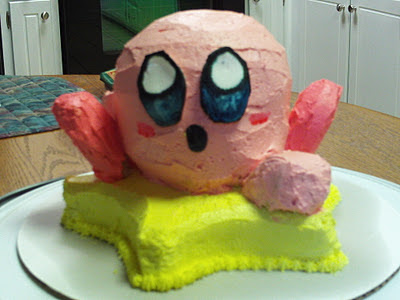 It's been awhile since I made this cake so I've got to pull the instructions from the dusty corners of my mind before I can relay them to you. I will say that his eyes and mouth are made from rolled out marshmallow fondant and painted. The star car is made from an 8" round cake that has been carved into a star and the feet (dark pink) and arms (light pink) are made from the trimmed off pieces of the star. The icing is buttercream.
1 comment:

When my son received his Electric Guitar Cake back in 2009, it became an instant hit with family and friends. My best friend's fiance, David, wanted one. But the guitar cake took so much time to make that I didn't have the time available to make another for his birthday the following month. In fact, time was so limited then that like the Kirby and His Star Car Cake, the Rockin Rubber Duck Cake that David requested instead was never posted to this blog. It's about time ol' "Rock" gets his big break! 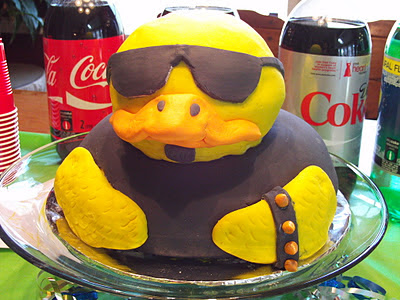 The cake was modeled after one of the rubber ducks displayed beneath the cake stand. He is actually the one that looked the most like David (and David plays the electric guitar among other instruments). 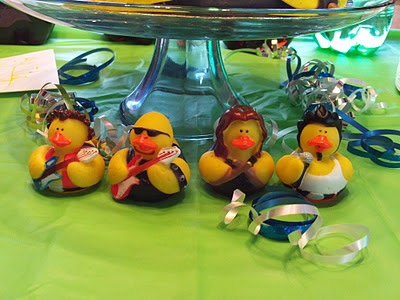 The entire outside is marshmallow fondant. The duck's bill is all fondant - and let me tell you, that is WAY too much weight to have hanging off the side of the cake without adequate support! The sides of the duck bill started to droop and ol' "Rock" looked like he was frowning by the time we cut the cake!

As with the Kirby Cake, it's been awhile since I made this cake so I've got to pull the instructions from the dusty corners of my mind before I can relay them to you.
No comments:

Recently, Will asked me to make a cake for an event put on by the new screenwriting club at the college. The club's name is "Fade In" and he requested the cake look like a movie script. I had made a movie script cake for his birthday before and knew I wanted to improve on it if I ever made one again. Here was my chance. 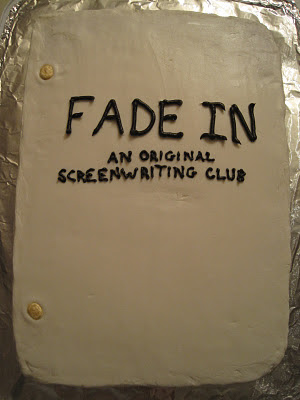 To begin, I prepared one box of Pillsbury Yellow cake mix. The only adjustment I made was to use the high altitude directions (I am in Colorado). I baked it in a 13x9 AirBake pan since it was the one 13x9 pan that had the least rounded corners.
Once the cake cooled for about 10 minutes, I turned it out onto a cooling rack to cool completely. I actually turn the cake out onto the rack and then flipped to make the rounded top face up.  I've found that the easiest way to flip cake is to sandwich it between 2 baking racks, hold the racks together and then flip quickly.
Using a long length of dental floss (un-flavored), I leveled the top of the cake. My kids love to munch on cake crust (as do I) so I save those pieces for them whenever I can.
I covered the base of my cake carrier with foil and flipped the cake onto it so the bottom of the cake was now facing up (It keeps you from having to deal with all those crumbs from the trimmed side).
At this point the cake can be completely covered in white icing. I used Pillsbury Classic White since the vanilla has an off-white color. The sides should be generously iced and the top should be smoothed out as much as possible.
I used an Icing Sculptor to make the sides look more like pages. I would not recommend an icing sculptor. I had nothing but problems with it. I would instead recommend using a much more inexpensive tool such as a decorating comb. You could also just wait for the icing to dry slightly and make grooves on the side with a knife or the side of your metal spatula. 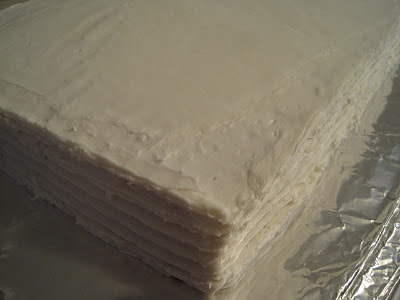 I let the white icing dry a bit before moving on to the black text. Because this is canned icing, the area in which you live can make a big difference in drying time. When I was in North Carolina, the higher humidity would make icing take longer to form a crust. In the summer, the icing never would crust. But here in Colorado with the air so dry, the canned icing formed a sufficient crust within ten minutes.
Once a crust has formed, gently press in any irregular areas around the top edges. You can also VERY LIGHTLY brush your hand across the top of the cake in sweeping motions from edge to edge to smooth the surface of the cake. Be careful doing this. Too much pressure will damage the crust and you'll have to play the waiting game again while your crust re-forms before you can continue. If you live in an area where the crust just doesn't seem to form, smooth the top of the icing as best you can with a spatula or other long straight edged tool. I have yet to achieve a perfectly smoothed iced cake top. It bugs me, but then, I don't sell my cakes so I don't fret too much over it :)
For the text, use a toothpick to trace out where you want the letters to go (I should have done this with the smaller letters as well, but I didn't). This will help you keep the piped letters straight and even. 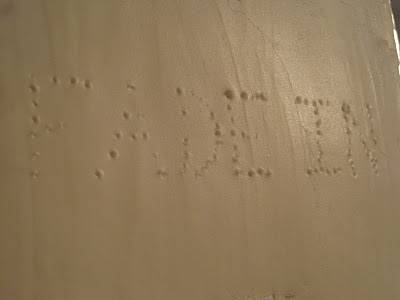 To create the black icing for the text, I started with Pillsbury Chocolate Fudge icing and added black color gel.. You can use whatever brand or flavor icing you want, but I start with some variation of chocolate icing to achieve a black color more quickly using less color gel. 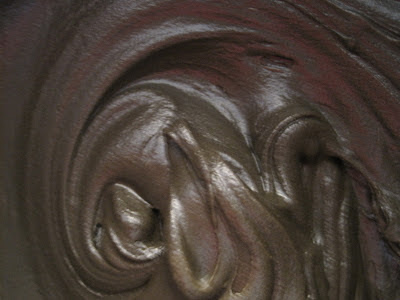 Mix the icing thoroughly and place into your decorating bag. I chose to use a decorating bag with a coupler. I was going to make text in 2 sizes so by using the coupler, I could easily change out the icing tips from the larger round tip for the large text to the smaller round tip for the small text. If you don't have decorating bags or icing tips or couplers, you can always place the black icing in two Ziploc bags. Cut a small hole in the bottom corner of one bag and cut an even smaller hole in the bottom corner of the other bag. Instant piping bags!
For the gold brads, I cut a miniature marshmallow in half and pressed them into rounded discs. Using a dampened decorating brush, I painted on gold colored Pearl Dust. 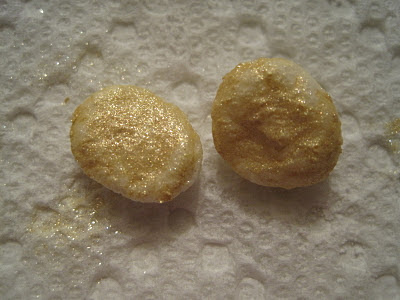 The painted brads were placed along one side of the cake top (see the main cake image for placement).
All done! Display, slice, serve and enjoy!
Will took the cake to the club function the next day. Apparently, it was very well received. Most of the cake was gone when it came back home and I hear the brownies they had available (supplied by the school) were hardly touched. Maybe they just weren't a brownie crowd...I like to think it was a very tasty cake.
No comments:

I'm making changes to the template and layout of the blog, adding larger images and filling in instructions on some of the cakes that are missing them so if you run into a strangely formatted post, know I'm working to fix it :) Thanks, and happy decorating!
No comments: