Tia has recently discovered Harry Potter. The first movie came out before she was born. Later, her oldest brother (10 years older than her) was deep into Harry Potter and she could have cared less. In later years, the movies became too dark for her - she was still quite young - and she soon associated Harry Potter with "scary movies".

Last month, that all changed. Tia rode with a friend to a birthday party and on the way there and back they watched The Sorcerer's Stone. She came home after the party talking about nothing but that movie. We rented it (and The Chamber Of Secrets) from the library.  Her brother brought the next two movies for her to see. She wanted to be Hermione for Halloween and she immediately requested a Harry Potter birthday cake.


Early on, I came across a cute Hedwig cake I wanted to try to duplicate so I pinned it. I decided at the last minute to not include the Hogwarts book in the cake design. I didn't want to have too much cake (and leftovers) so I wound up with something similar that Tia kept ooohh-ing and aahh-ing over because "He's soooo cuuute!" 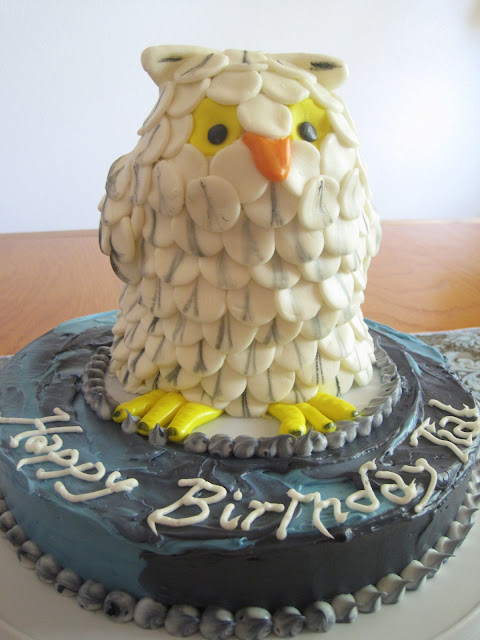 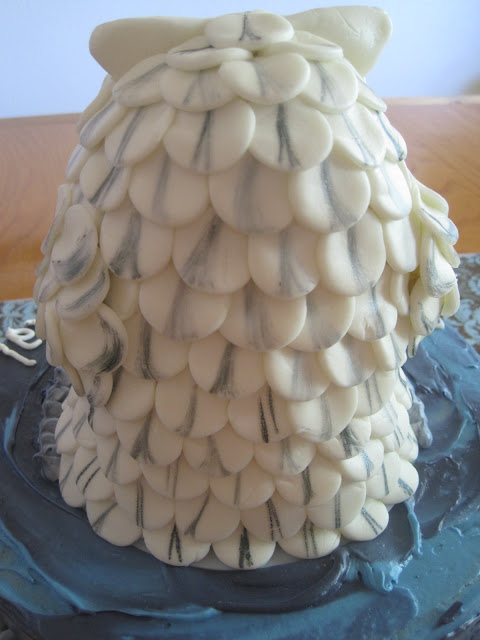 The cake is a WASC (White Almond Sour Cream) Cake that starts with a box mix. I decided to use it because it because of the many layers I would need for Hedwig. You can find the recipe on Cake Central. One batch made a 10 inch and an 8 inch square cake.

Once the cakes were cooled, I used a large (empty and clean) crushed tomato can to cut out several rounds from the 8-inch square cake. Stack the layers using some Pillsbury white icing between the layers. Wrap the whole stack together in plastic wrap and place it in the refrigerator (I found this made the stack much more sturdy). 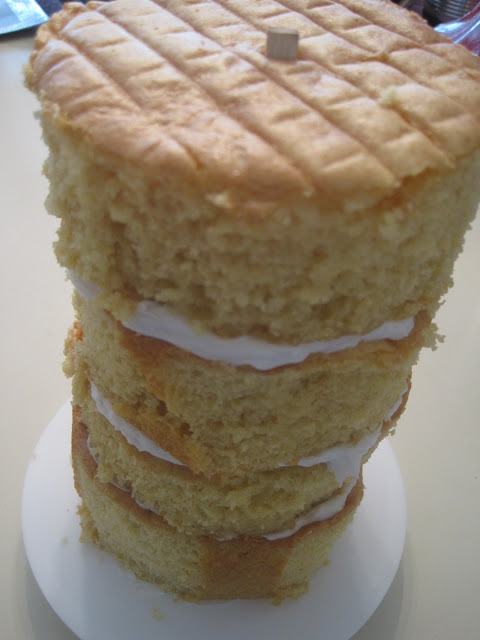 You can see in the photo above I have a chopstick running through the middle. After refrigerating the stack, I found I didn't need the chopstick (good thing too because even though I trimmed the stick, it was STILL too tall).

While the stack is in the refrigerator, you can ice the base of the cake and work on your fondant.

I chose to simply ice the base instead of covering it with fondant. Since the owl is white, I wanted some color to the base. I chose to swirl blue and purple together. 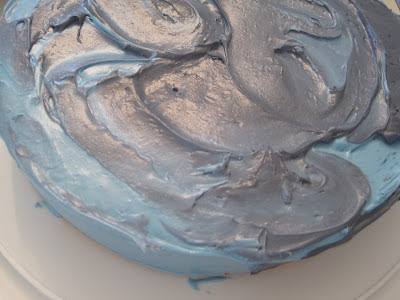 Once iced, set the base aside and start working on your fondant pieces.  This fondant is my usual Marshmallow Fondant.  I made the feet using 3 small yellow ropes connected at one end for each foot. 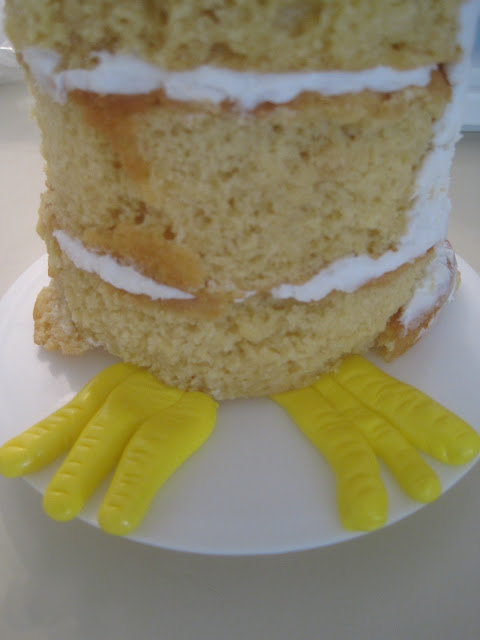 Those feet look big but about a third of them will be covered by icing and feathers.I also used yellow to make the eyes and cut them out using the wide end of a 2D Wilton decorating tip. I used the same tip to cut out all the "feathers" from the white fondant. 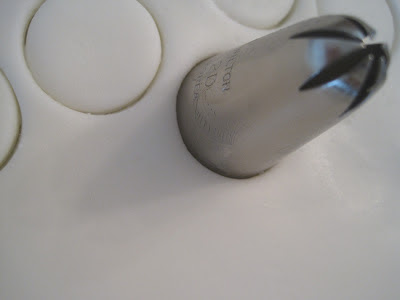 The ears were made from white fondant. Form two sections of fondant into triangles about 1/4" think and 1 1/2 inches across.

A small amount of fondant was colored black and rolled into tiny balls for the eyes.  I added a smidgen of red coloring to a small batch of leftover yellow fondant to make it orange for the beak. 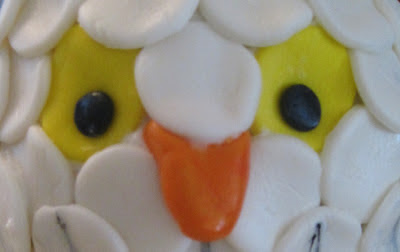 The feathers were painted with a brush dipped first into almond flavoring and then swiped across black gel coloring. I just wanted to pick up a small bit of the black color for "painting".  I left about 12 feathers un-painted to be placed around the face. 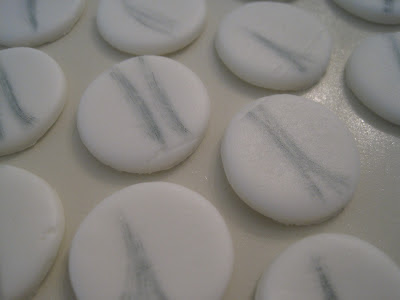 With all the fondant pieces made, you're ready to put Hedwig together!

Carve the top of the cake to round out the head. I used scraps from the head to add bulk to the sides where the wings should go. This is totally optional and actually not shown in the photo below. 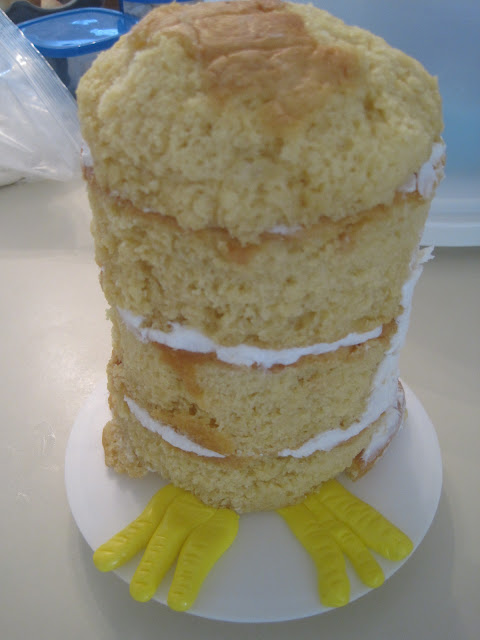 Ice all around the base of the cake stack with white icing making sure there is no cake showing.  You only need to ice about 2 inches up for now.

Start placing feathers all around the base. 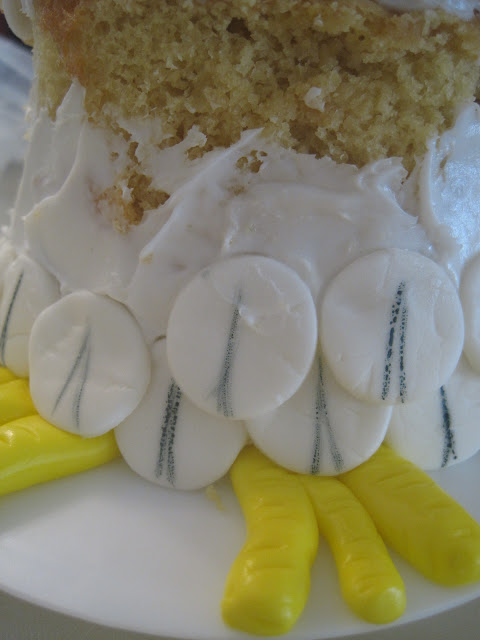 Once you have made the first row of feathers, ice a little higher and start on the second row of feathers overlapping the first row. Continue this all the way up to the top of the wings. I did not cover the wing areas in this step. I came back and finished them last so they appeared to be above all the other feathers.

Before starting on the head, ice the ears into place. Then place the eyes and surround them with the unpainted feather pieces. Place the beak in place.

You can use your paintbrush to paint black on the tips of the toes and the insides of the ears. 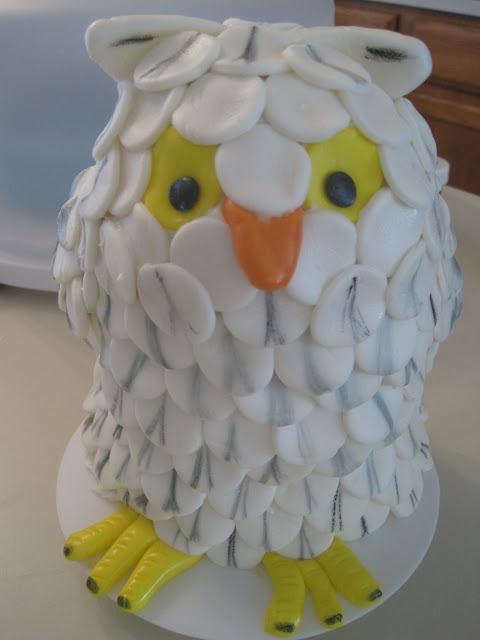 All done! Place you candles and enjoy! 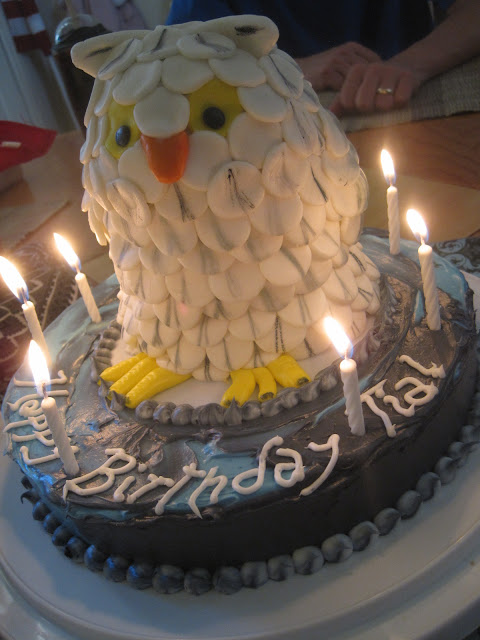