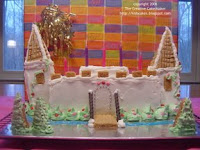 After making this cake, I decided if I ever made another castle cake, I would probably use a denser cake. I love Pillsbury cake, but it's so moist that it doesn't perform well for taller cakes.

For this castle cake, I made a standard 13"x9" cake. After cooling it completely, I cut the cake into thirds crosswise creating three 4.3" x 9" pieces. I iced one of the pieces and stacked another on top, forming the main section of the castle. I cut a 1"x4" slice off the end of the remaining section and set it aside. The rest of the remaining section was cut into thirds crosswise making three 2"x4" pieces. Each of those were cut in half to create a total of six 2"x2" pieces. These were used to make the two towers. Here is the basic order for assembly:
The turrets, trees, drawbridge, windows, etc were all made with peanut butter cookies. I cut castle pieces out of the dough and baked as directed. The I assembled using the icing as "glue". I would recommend finding something easier to use for the turrets. Maybe a couple of ice cream sugar cones or something.
The base border of the cake is a series of "rose bushes" made with large blobs of green icing (squeezed out of a ziplock bag with a large hole cut in the corner) and candy decorating hearts
.
The doorway is outlined with silver decorating balls and above the doorway are more hearts.

The drawbridge "rope" is simply 2 chocolate covered candy sticks anchored to the "floor" with icing.

I piped some "vines" onto the towers and added more candy hearts as "flowers".

Blue decorating gel finishes it off as the water in the moat.