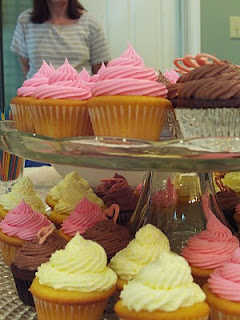 Mmmmm...Cupcakes! And mini cupcakes are even better! They don't come with as much guilt! So when my best friend started taking about desserts for her bridal shower (mini eclairs and such) I was quick to mention mini cupcakes. Of course, I didn't think of how I would transport them before I said I could make them, but I didn't mind the thought of eating the ones that didn't travel well...
I knew well in advance what cupcakes I would make. See below for the different varieties and how to make each.
Chocolate Raspberry was first on the list. I thought of making a chocolate cake with raspberry mousse icing but figured that might not be enough chocolate in one bite for most of this crowd.
I made devils food cake and piped raspberry jam in the middle of each one. That made for a delicious surprise!

Chocolate Raspberry filled - make mini chocolate cupcakes as normal. Once cooled, fill a piping bag with raspberry jam. Going through the tops of the cupcakes, squeeze about a teaspoon of jam into the center of each cupcake. Mix chocolate icing and raspberry flavoring together (how much you use is just a matter of taste). If you plan to pipe the icing onto the cupcakes in peaks, you will need to add powdered sugar to make a stiff consistency.
Lemon - There's nothing fancy about the cupcakes themselves. It's lemon flavored box cake mix. However, the icing is made with lemon juice, lemon peel, cool whip and Knox unflavored gelatin (one envelope dissolved in 1/4 cup cold water). Once the icing is piped on, place in the refrigerator to cool. The gelatin in the icing helps to set it. These would be fantastic on a summer day!
Pink - the easiest of all the cupcakes. This one is yellow cake mix, baked according to package directions. The icing is canned vanilla icing colored pink and made stiff with the addition of some powdered sugar.