Tristan knew exactly what he wanted as his birthday cake this year. He has been so engrossed in Legos for the last three years and recently began creating Lego "videos" (stop motion photography) so it came as no surprise when he blurted out his wishes at the dinner table one night. "I want a Lego Mini figure cake! But I want the original face. No eyebrows." 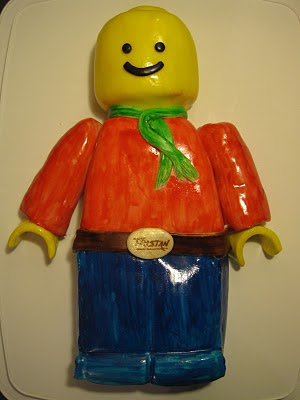 "How odd," I thought, "for him to be specific about the eyebrows." But, that's Tristan. And a mini-figure cake he got! He even put together one for me with the eyes (no eyebrows), pants and shirt he wanted out of his Lego pieces. Lucky for me, he wanted a very basic "original looking" Lego man.
Tristan told me about this cake well in advance. I thought about it well in advance...then forgot about it for a couple of weeks. It's a mini-figure...how hard could it be?
I scanned for cakes having anything to do with Lego. I found a black and white drawing of a mini-figure that I downloaded and enlarge to a 8x10 size. I would use it as a template to cut out the cake pieces so at least our Lego guy would be proportional.
A couple days before his birthday, I baked a 13x9 cake and cut out the pieces using my "template". I didn't mind that the template was only 8x10. The Lego minifigure isn't flat so I planned to use some cake "scraps" to give him bulk where he needed it - mainly his head and his toes. Besides, that's PLENTY of cake to eat. The less cake we had left over, the better.
I found out the morning before his birthday as I was putting it together and trying to ice it that I had not quite planned out the creation of this cake enough.
Will emailed asking how the cake was coming along. "The cake looks like crap," was all I said about it. Icing was glopping everywhere and would NOT make a nice edge. And since I had to cut the cake so much, there were crumbs EVERYWHERE! I had only gotten the legs iced when I KNEW this was not going to work. I had to resort to the marshmallow fondant and I had to do it in a hurry! I had bought 2 bags of marshmallows just in case this happened and luckily, Tia (the marshmallow disposal system) hadn't found them. I didn't mind doing the marshmallow fondant (and actually had a sneaking suspicion it would look a lot better with fondant) but I really hoped I could get it done quickly with icing.
I had just enough time to make the fondant and put it in the fridge to rest before I had to leave to get the kids from school. 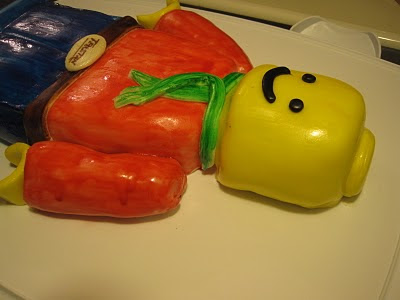 That afternoon I set to work covering the cake with fondant. The arms were wrapped separately and set next to the rest of the cake. The hands were made from rectangles of fondant that were shaped around a bottle then secured with a toothpick to the arms. It wasn't long before the kids knew what a ghost mini-figure would look like (no color). 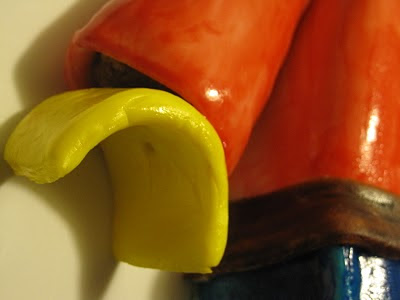 That evening, I started painting the cake. Tristan had asked for basic colors (blue, red and of course, Lego man yellow). I wasn't too worried at this point about how he would look. The cake was coming along beautifully. The only thing that worried me was the face. It had to look perfect. I decided to make it using scraps of fondant colored black. 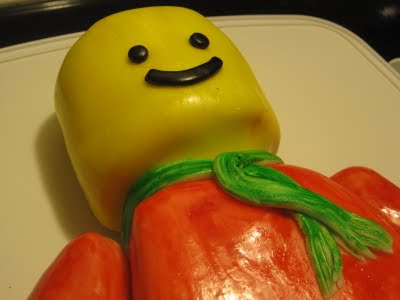 The areas where the mini-figure's waist and neck were looked pretty rough (the seams where the pants and shirt met and the head and shirt met) so I created a belt (and buckle) for the waist and a scarf for the neck area. 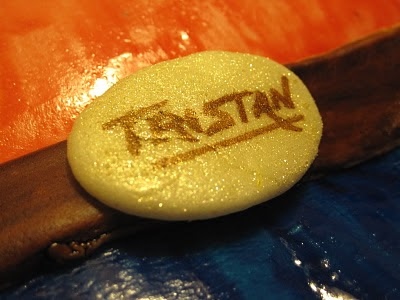 I was pretty pleased with the final product - especially considering the mess I started out with. Tristan was thrilled with the results, and that's what really mattered the most. 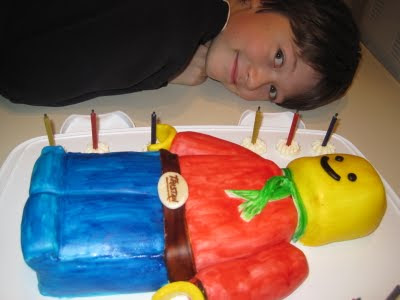 Great story I really enjoyed it and the cake!